Cannibal Movie is a quite obscure band and there is only little information about the members. Would you like to introduce yourselves and tell us a bit about where you come from?

We come from a city in Southern Italy, Taranto. It’s a very singular place, surrounded by two seas, where activities like fishing and agriculture together with rural architectures and old religious traditions coexist with massive production of steel and environmental degradation; a lot of contradictions that make it a really stimulant place to live. This is our base, here we work and pursue our passion for music, biology, plants and cinema.

Is Cannibal Movie your main project or do other groups you’re involved in play an equal role? Which other bands of yours are active at the moment?

Both of us are involved in other projects. Gaspare plays drums in a band called Bogong in Action and I run a solo project under my own name. Inside our collateral experiences we are developing, yet each one moving into opposite directions concerning what individual aspects we bring into the band. On the one hand, there is a more instinctive and free rhythmical approach and on the other hand a more controlled and electronic one. 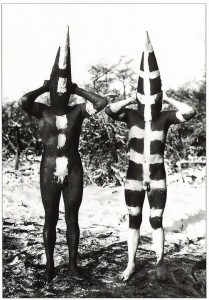 Your music has many references to psychedelia from around the late sixties. What is it that fascinates you most about that/those style(s)? Is it OK for you to be described as retro or nostalgic?

We are often tagged as a psychedelic band, but we have to admit that our main references are others. We have been strongly influenced by Italian music productions from the sixties to the eighties, above all soundtracks, early electronica experiments, library music. We’re fascinated by the freshness and intensity of that material and it has been natural for us to develop our own sound starting from these musical roots, filtering them through new explorations in noise, drones, electronic, hypnagogia and all sorts of sound we have assimilated; we are really omnivorous listeners. Anyway, our nostalgic feelings are projected towards the future.

What are your favourite musicians of that era? Any secret tip for our readers?

What element in your music would you consider to be most “modern“?

The volume. Joke apart, we are trying to play a timeless music that could be ancestral and futuristic at the same time.

Whenever I listen to old music (or music that sounds old) of quality, I condemn the typical process of fashion cycles that often turn original styles into something average, and later on into something old fashioned. Although retro concepts are actually a part of that, do you think references to the past (or even something like collecting) can also work against the tooth of time?

It could be kind of a will to stop time and let it float into a timeless space made by all the sounds, the objects, the experiences we have loved. Surely, It’s reassuring to live inside this comfortable balloon, but at the same time this could be a check for creativity and progress. New technologies have helped making all the old music easily accessible, and it’s as if there was no temporal line anymore. We are definitely sons of our time. 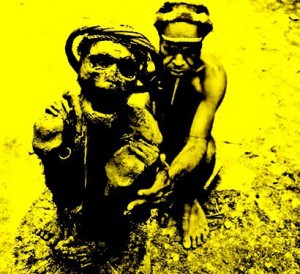 Could you imagine yourselves adding some instrument/voice to your drums and organ?

At the moment we are working on an audio/video set based on the Italian cult movie “La casa dale finestre che ridono”, directed by Pupi Avati and scored by Amedeo Tommasi. For this scoring we are focusing on a more electronic sound, working only with processed organ, electronic drum and some other two old synths. In the future we’ll continue to explore new possibilities trying to preserve the core of our sound.

Movie references are a major topic of your recordings. Why is it especially the Cannibal genre which you named your group after?

Cannibal Movies were a typical Italian film genre, its features corresponded perfectly with what we are expressing in our music. It’s a personal expression, but kind of linked to our own culture, just contaminated by the colours and the atmospheares of far and exotic scenaries.

According to the ethnologist Claude Lévi-Strauss cannibalism is the “alimentary form of incest“. Is that an idea that you can understand or would you say that that is too far-fetched?

It could be seen as a sort of identification, assimilation or communion of the other one, moreover, if you think, in the Catholic tradition, as in ancient religions, the believers eat the body of their God. 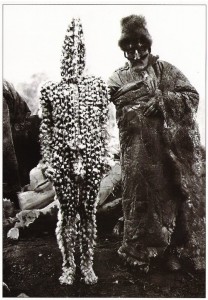 Whithout any doubt, the themes of “Cannibal Holocaust” are extremely relevant for today and it’s absolutely reductive to discuss it only with reference to the violent visual impact. Manipulation of reality by media is always a dangerous risk and it’s sick to note how the new possibilities of information are not always able to fill this lack of trust, and tend to produce further confusion and ambiguity.

Have you ever met people of that era personally? A friend of mine once did an interview with Franco Prosperi, who has a house in the forest filled with a huge collection of bizarre exotica…

Indirectly we have had contact with Prosperi: our music has been used as soundtrack for a short interview/documentary (made by VICE magazine) shot at the house of the director (at Formia, not so far from Taranto).

Music without typical song structure is often described as “score for an imaginary movie“ or the like. It may sound a bit clichéd, but visual associations while listening to music appear legitimate to me. Do you feel any sympathy for that idea?

Yes, and above all it’s interesting how sorts of “abstract” musics could evoke concrete worlds and tangible images depending on the listener; or when it’s the sound itself that tries to describes abstract concepts or things that, at first sight, seem so distant from music, like objects: the results could be unexpected

You’ve recently released a tape called “Mondo Music“. If someone created a sort of neo mondo film fitting to your music, what should the film be like?

We’d like it to be focused on the contrast between scientific and technological progress and the ever persistant primitive and irrational insticts of human kind. It seems as if this technical evolution does not correspond to a real interior and intellectual growing of those who can benefit from it.

Jess Franco has just died. What would the adequate funeral music by Cannibal Movie sound like?

“Schiave Bianche” could be a good funeral march. 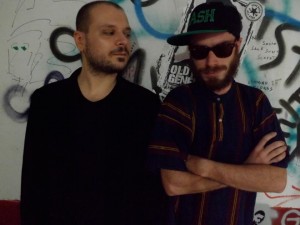 Let’s close with the obligatory “future plans” question – are you working on some new stuff that we can expect later this year?

Quite recently we have released the vinyl edition of Mondo Music (via the Italian label Yerevan Tapes), further on we’ll be busy with concerts for the summer. We will close this series of concerts with a little tour in Greece in September. After that we will start working on new stuff. Anyway, we’re ready for some new surprises.