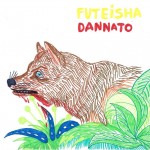 With his main endeavor Futeisha, Turin-based Argentine guitarist Juan Scassa plays an oblique but beautiful blend of soft, Mediterranean folk sounds, psychedelic noise and radio play-like sequences. What distinguishes his music from common “dark folk” standards is the absence of any tame romanticism, and with its snappy nihilistic undertones it is an ideal representative of a direction, for which David Tibet’s term “cartoon apocalypse” would fit quite well. In the following interview, Scassa talks about his involvement with the notorious psych rockers La Piramide di Sangue, about the beginnings of Futeisha, about his second mainstay in the world of comics and the planned new album, which consists of cover versions of notable Current 93 songs in Japanese.

I first came in contact with you in the context of La Piramide di Sangue, but I’m sure you did music before. So what were your first endeavors in music? Any old projects you would still recommend?

I’ve started to work with Stefano Isaia (Movie Star Junkies, Lame, ecc) for the first tape of Gianni Giublena Rosacroce, out on Yerevan Tapes in 2011, and then La Piramide began. Stefano is a great musician and the album is really inspiring. The moniker Dedalo666, that I used to use came from this release.

Some time before, in 2008, I’ve played in a lo-fi band, Dirty Sanchez. Once we played in a squat and we got insulted by some skin. Maybe some of the songs werenot so bad, but we had absolutely no experience. With my band-mate Andrea we recorded some noise-concrete tapes under the moniker Jennifer. No good music, but good memories.

Is music your basic default setting as an artist, or did you start with visual stuff? Did you have an academic teaching, or is your approach more of an autodidact sort?

I studied classic guitar when I was at high school, but I practice a very punkish DIY approach.

Were you a founding member of La Piramide? How did you guys meet? If you had a (vague) concept of the music and the symbolism, how would you describe it?

As I said, Stefano was recording his first solo album as Gianni Giublena Rosacroce and asked to me to ad some classic guitar. He was already thinking to form a new psychedelic-rock band, so we spoke with some friends of us: Kebab (Craxi Driver, Murdercock), Jena (Six mistake, Licenza di Collina), Krano (Vermillion Sands, Krano), Stefano Lopiccolo (Love Boat) and Walter (King Suffy Generator). We rearranged the songs in a more rock attitude… so La Piramide di Sangue was actually a pyramid with a heavy metal stone base and the Stefano’s clarinet on the top. 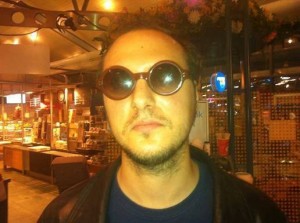 How was your role in the group apart from playing the guitar? Did you take part in the composition process, or was it more jam-like improv anyway?

It depends song by song. We used to jam, but usually songs came out from some melody of Stefano and then the other contributions were arranged all together.

After the albums “Tebe” and “Sette” and a couple of concerts it got a bit quiet. Is it, because it’s a seven piece and the members live at different places? Will it in the one or other form go on in the future?

I’s very difficult to manage a seven member band, even more when everyone has a lot of other projects. Since our drummer moved Sardegna, La Piramide is in a kind of non-recovering coma. I don’t think we’ll play anymore, and it’s really a pity, because still we have a new album of great songs to record.

What can you tell us about the birth of Futeisha, which, as I guess, is your main project today? Was there a background story of it, or some previous adventure that lead in that direction?

Futeisha was born in Kyoto 2010, recording concrete sounds, voices and manipulating sounds. I was playing guitar in a punk band called Flat Sucks at the time. There are some old Futeisha albums, like “Simulacra”, between 2010 and 2014, when “Dannato” come out, but they were recorded really bad and are not interesting at all.

Was it conceived as a solo project or as an open one? Seems you soon decided to works with a number of collaborators. 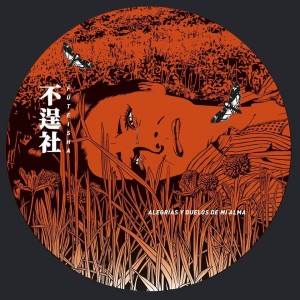 Since I’m a big fan of England’s dark folk scene, I’ve decided to manage a band like David Tibet or Douglas Pierce did it. You see, here in Turin there is a kind of scene with bands like Movie Star Junkies and Oaxaca and it’s really cool to play with friends. In “Dannato”, Krano, Vinz (MST, Vernon Selavy, Heart of Snake), Maria (GGG, Space Aliens from Outers Space, Lame) and other helped me very much. I’ll be forever grateful for that.

As far as I know the name Futeisha refers to a Korean minority in Japan and was originally a derogative term. What can you tell us about this subject?

< Futeisha (不逞社, “The Outlaws”) was an anarchist group founded by Park Yeol and Kaneko Fumiko in Japan in 1919. Futeisha satirized the way Koreans were referred to by the authorities as troublemakers. Futei senjin (不逞鮮人), or the unruly Korean. Park was arrested without charge on September 2, 1923, the day after the Great Kantō earthquake. Two days later Kaneko was also detained by police. Based on thin evidence they were eventually charged with high treason for plotting a bomb attack upon the wedding of Crown Prince Hirohito. Both were convicted and sentenced to death on March 25, 1926, but their sentences were commuted to life imprisonment by the Emperor Shōwa. Kaneko died in prison on July 23, 1926, reportedly by suicide. > from Wiki

Seems you have a general interest in Japan and Far Eastern counter culture. What are your main references in that context and what role does this play in your music?

I studied Japanese at University and I’m a translator of Japanese. I lived in Kyoto for one year as a student. I miss Japan very much. I very like the austerity and the ritualistic aspect of some traditional music and culture. Undoubtedly some grandmasters of literature, like Mishima Yukio, Ishikawa Jun or Abe Kobo, are not just main refences for the music.

As you told me recently, you are about to record a Current 93 tribute album with all lyrics in Japanese sung by a Japanese singer. As I’m sure you won’t just change the language, what can we expect?

We want to translate the songs into Japanese and record one of the weirdest album ever. Hirayama Yu is a mucisian who does harsh-noise cut-up stuff, writer (he wrote several books about the Industrial and Experimental, mangaka and runs a little label Suikazura (in Japanese “Honeysuckle”).

In “Temujin” on the first Futeisha tape you already referred to Current 93, and the live piece “Curento 93″ seems – apart from being a folk dance – also to allude ironically to this band. Indeed, David Tibet and his ever changing group is one of the most influential underground groups of the last decades. What would you say makes them so outstanding?

“Curento” is kind of a traditional music and dance piece from the Piemonte Valleys. It was a joke to re-name the song in this way. I think a radical approach to art in general makes David Tibet’s c93 one of the most outstanding bands: a perfect and creepy mix of tradition and avantgarde. The way Tibet does music is in some way related to the theatre of Antonin Artaud, like a continuous revelation of the inner and scary self of the human being.

Are there other influential artists or contemporary favourites that you would recommend?

Oh! There are really a lot of good musicians. I just know I like Jonathan Richman very much. 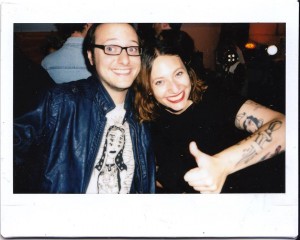 One major element in Futeisha seems to be the combination of some quite far contradictions, for instance you can hear mediaeval pastoral guitar pieces followed by dystopian noise. But in all their confusing darkness, there is always something vital and humorous in these sudden changes. Would you agree, and is this also a bit how you see the world?

Contradiction is a topic that has always inspired me. It is one of the main features of life itself. Folk sounds, like the classic guitar, in a harsh noise environment is a research of humanism in a halber mensch reality. But the landscape in Futeisha is pessimistic: Armageddon has already happened. The reseach of the past is just a nostalgic, an estethic research of a human being that can be no more.

Although there is this folkish element in Futeisha, you hardly play songs in the strict sense of the word, often I notice a strong filmic or radio play like narrative. Is this intended?

I like to construct simple melodies and to create musical “rooms” or “moods” to describe the death of the soul.

Your album “Sulla Via Del Re Nel Ritorno” is a recording of one of a few Futeisha concerts, and from the atmosphere it sounded way more ritualistic than the studio recordings. How can we imagine Futeisha shows?

I try to research Antonin Artaud’s idea of Theater of Cruelty as “a primitive ceremonial experience intended to liberate the human subconscious and reveal man to himself”. Certainly Michele Guglielmi (Oaxaca, I Residenti), Ivan Grosso (Oaxaca) and Ottavio Boglione arranged my songs with both traditional and electronic instruments creating a really magical atmosphere. It was really something to play with them.

Your second field of activity is the website “Becomix”, a kind of blog database for comics. What can you tell us about this project and how big do you like it to grow?

I’m working in a database/marketplace for comics, where everyone can manage his collection and buy/sell comics. Just like other sites, but exclusivelly in comics. I don’t know how big it could become, but my collegues did a really special SEO working. Hope to have a job tomorrow eheheh. In the main time I started to write about comics, and recently, an important site, like Lo Spazio Bianco, asked my collaboration. I’m very proud of it.

In the maintime with Daniele we’re working on a new book inspired by 90s sci-fi manga and Burroughs. It will be published in 2019, I hope.

If you had to name the most combining element in your different music projects and your work for comics and illustrations, what would it be?

Eradication of every day certainty.