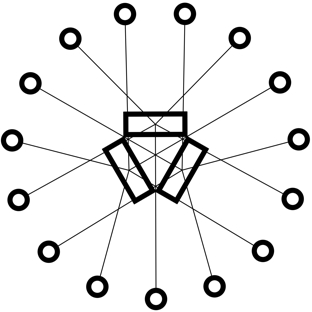 “Midira’s final collaboration with the German drone supergroup N + [ B O L T ] is a stereo reduction of a massive 15 amps installation at Christuskirche Bochum. After releasing their first three albums and a limited EP, Midira are now closing the circle with this impressive project. Back in 2016, when the band was still a trio, theys implemented a live installation at Christuskirche Bochum, which featured 15 amps arranged in a circle, like featured on the blueprint that is also the cover artwork. Every musician had 5 amps and the possibility to refer to every one of them individually. The musicians and the audience were sitting inside the 15 amps circle, the lights were off, the band played an improvised set and the sounds moved from one side to the other. It was an amazing ambient/drone experience for everyone involved. So the defiance was to archive this happening on vinyl. The result is a stereo reduction of the installation, which got mixed and mastered by bandmember Andreas Brinke. The challenge is that there are at least 15 different ways how the audience experienced that concert, cause depending on where you were sitting, you had different sounds in focus. The album features the set in two parts, starting with the slowly evolving beginning with a focus on each instrument before the set grows into a mesmerizing soundwall, before calming down again. 15 Amps comes as a limited edition of 100 copies on black vinyl with screenprinted reverseboard sleeves. 25 of those 100 copies will be released as a deluxe edition with several bonus items.” (Midira)