It’s often said that it’s the second album of a band or artist, that really shows the direction and proves its enduring quality. I think “Black Mamba“ has finally shown that Cut Hands is not just a “project“. Which constant elements and changes do you see as most important, when you compare the beginning of Cut Hands to the new album?

Thank you! You know, it’s difficult to identify components that have special value, my tendency has always been to use a different set of rules for any single piece of music, often destroying the guide notes or even the technology used as a means to ensure that the creative process doesn’t get tempted towards simple reiterations of the same thing – at the core of Cut Hands there is darkness and there are rhythms, beyond that anything’s really possible.

Some reviewers have argued that “Black Mamba“ is less abrasive than its predecessor. Would you say that the noise part of/in your music is slowly diminishing and vanishing? 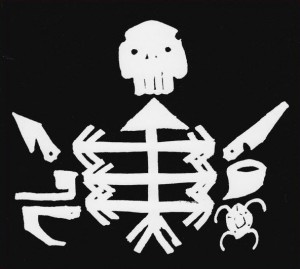 Abrasive noise or sounds have the potential for great emotional expression and is something I’ve always utilized, and probably always will – for me, changing the dynamics of noise can make that even more powerful and enjoyable, certainly it doesn’t have to be in someone’s face all the time, I’m still continuing to learn different ways to deploy it.

On “Black Mamba“ three tracks have been used for soundtracks. Were these specifically commissioned and is that a direction you want to pursue further in the future?

Yes, I think it’s now as many as 4 or 5 of the songs have been used (“54 Needles” is also in “Bub & Friendz”, premiering at this year’s TriBeCa Festival). Although these tracks were specifically commissioned, they weren’t musically directed beyond vague associations and are integrally Cut Hands pieces.

Snoop Dogg (or his reincarnation Snoop Lion) is not an artist that is immediately associated with the work you’ve been doing for the past decades. What does an artist like Snoop signify for you? Would you say that the idea of transformation from Dogg to Lion appealed to you?

Early 90s Death Row and Dre as a producer (making Snoop Dogg’s best work) had a major influence; you can appreciate in the film the purity of Snoop’s intent and respect during his stays in Jamaica, despite some of the inevitable later claims of marketing exploitation; the potential of personal transformation in general is something that I’ve always been deeply involved with. 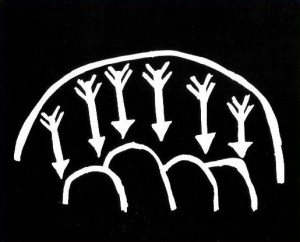 How was your interest in “Krokodil” and its devastating (side-)effects aroused?

A piece was commissioned for the film “Krokodil Tears”, which dealt specifically with this, I was very moved by the shocking images of those suffering from the devastating side-effects of the drug juxtaposed with the enormous panoramic beauty of the Siberian wilderness.

The first track contains material that was originally used for your installation at Tate Modern. The lyrics played an increasingly important role in the last couple of Whitehouse-releases whereas Cut Hands is primarily instrumental. What is for you the relationship between sound and word(s) in general and in Cut Hands in particular?

Yes, there’ll be more of these extralinguistic sequencing tracks. At its heart, I guess my expertise is really as a dirty words specialist and just as there is less noise in the music, there are also fewer words: This was one of the reasons for incorporating special texts for each song on “Black Mamba” in the accompanying booklet, it’s still really important.

How did it feel to be part of the art world with ”Extralinguistic Sequencing“ – at least temporarily?

Actually, without its ever being a deliberate strategy, I do so much all over the place within the mainstream artworld now, it almost seems like a familiar home. 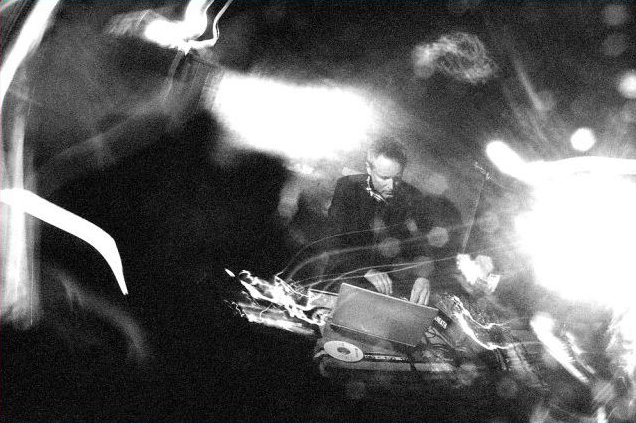 I remember that when you played in Cologne at least a couple of people seemed to be irritated and agitated by the film that was shown in the background. Have you experienced people accusing you (there or somewhere else) of using such images just for the sake of cheap thrills or that this is an exploitation of indigenous culture(s) by somebody from the west (I’m asking because I also remember a letter in the Wire about a similar topic)?

The thing is these aren’t mondo films! The images are either from Jean Rouch in the Congo or Maya Deren’s “The Divine Horsemen” of vaudou rituals and carnivals in Haiti; these kinds of reactions aren’t uncommon and I’m happy that they’re occurring because anybody that feels like that upon watching people celebrating and having an important meaningful time should take a cold hard look into their own conscience and wonder what the real cause of their agitation is. It’s not exploitation, it’s an important part of my inspiration to which I’m paying homage and which are also of great beauty.

Same comments apply to The Wire’s editor who, with seemingly no trace of irony in his unseemly haste to take a gratuitous potshot at me, managed to simultaneously justify naked piracy of original African music to Western audiences – just because you use the term ‘ethnographic’ music, doesn’t make the expropriation any less culpable.

As far as I know, you haven’t visited Africa so far. Do you think that the geographical distance and the lack of direct experience is a main source of creativity? I mean, it requires a stronger stimulation of fancy…

Yes, that’s right. Creativity comes from the imagination, stimulation is good to stoke its flames – and yet even in an empty windowless room, it would be and is capable of amazing things. 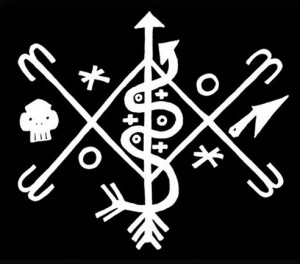 Do you plan to go there one day, and if yes, which places and things would you love to see?

The sunsets, the wildlife, the sounds of life, the smells, surely it must all be incredible. it’s a dream, I hope that will be realized one day.

What do you think are the most valuable things that anyone can learn and adapt from African music and aesthetics?

The best book I ever read on the subject is the wonderful ‘African Rhythm And African Sensibility’; one of the chapters is essentially a philosophical monologue by master drummer Alhaji Ibrahim Abdulai; even to begin to come to terms with African music, one has to give up so many fixed preconceived notions about our music and what it represents and does for us – that process in itself is transformational, and hugely rewarding.

I guess that from a European or Western perspective, no continent is so much tied to stereotypes as Africa is. The cliché of warlords and hut barracks contrasts the cliché of archaic masks and pittoresque landscapes. Whilst some people complain about the absence of skyscrapers over there and want to help the people due to our own standards, others stress the vast difference between our cultures and their ones. I often think that we tend to forget to ask the Africans first, how they see themselves. How do you think about this? 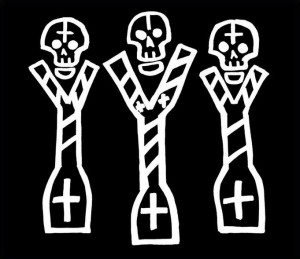 Totally agree with you. I have no issue with the romanticisation, that’s natural and happens everywhere, how people around the world feel about London, New York, Paris, Berlin, Bangkok, Tokyo are all essentially heavily romanticised images, for better or worse; where Africa suffers is from European maternalistic condescension, guilt complexes, patronizing saviourism, capitalist aggression, evangelizing, and so on – it’s as if it was not enough to be punished once by colonialism.

You’ve said in an earlier interview, that you are not really interested in religious belief systems, I think chiefly because of the group aspects. Would you say, that your music with Cut Hands has or can have something like a spiritual dimension for the listener/dancer nontheless?

I hesitate to use the word ‘spiritual’ because it’s so commonly associated with the language of religion; however, the experiences often elicited by religion and other social phenomena are natural and could be experienced through music for example. Elements of this are alluded to in the aforementioned book, and indeed in Maya Deren’s accompanying “Divine Horsemen” book, she experiences this first hand in Haiti – Keith Johnston explores this in his drama experiments with masks in “Improv”.

When you include elements from cults like Voudou, Santeria etc. into Cut Hands, do you keep an awareness for the world view behind this, or do you regard your musical reference more as a decontextualisation of ”occult“ sounds? 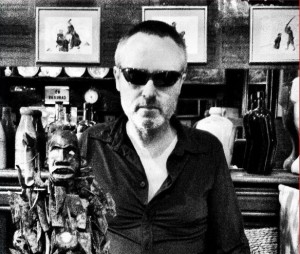 What many people fail to understand is how open Voudou and Santeria are, especially compared to the default religious monoliths – they encourage new participation and free artistic expression within their traditions, they are friendly; embracing these traditions is participating is celebrating, it’s all the same thing. Just as you can’t laugh or kiss someone or talk aloud in a church, we are so used to walking on tiptoes around ‘religion’ so as not to offend, it’s easy to forget that in other syncretised traditions, things just aren’t the same.

The DJ Benetti sets are still part of your event schedule.. At the heyday of Italo Disco you were very much involved in the noise music scene, so how and when did you discover this sort of music and what makes it so outstanding for you?

Funnily enough, and it’s because I’m old enough, it was right at the same time it happened; I moved to live in Barcelona in 1984/85 and became addicted to it there, where you’d hear Italo all the time in clubs and on the radio! Probably more even than if you lived in Italy.

As much new music as I can with interest and, despite my comments, there’s actually hell of a lot of great stuff going on nowadays; by the overwhelming volume of choice that we now have access to, I’ve learnt that you just have to curate your musical environment a bit better and work a little bit harder to find things; the rewards make that worthwhile.

To end on a lighter note…You’ve just collected all “Uncle William” episodes. Do you think you may write new ones?

The world’s probably had more than enough Uncle William already…