Let’s start in a conventional way: How was it as you started playing music, did you have a classical education, and when did you start the project that we know as „Lili Refrain“?

I started playing guitar when I was 14, I’ve never taken lessons but I would love to have a classical education. I’m an autodidact and I learned to play trying to emulate the guitarists that I liked more at that time. One of the first riffs I learned was Fade to Black, I loved the day when I learned it all! My solo project started in 2006 when I focused my interest on research about stratification. I started doing experiments of overlapping sound with tape, multitrack and sequencer. The desire to bring this project also in live performance made me enter in the universe of the loop in real time, and it was absolute a revolution!

In your live performances you often use loop techniques, and let the music go its own way. There are recordings where you even leave stage and communicate, while the music goes on playing. On other occasions it is as if you jam with yourselves. Would you say that this has something of an ideal middle way between having control (as a solo musician) and staying flexible (as a part of something that is independent from your control)? 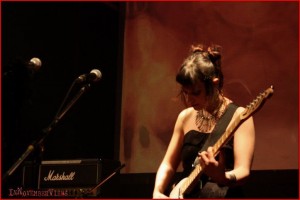 The loop technique allows me to create innumerable orchestrations of myself leaving me free to control everything or improvise on sound layering that I create in real time. Certainly this use of loops requires a great form of control, especially rhythmic. Just change an accent or wrong a time and the song becomes something else. I really like to leave interact this kind of rigor with the absolute unpredictability of events although my control component is also present during the radical improvisations. This freedom and flexibility is the reason why I don’t use any backing tracks created previously.

Refering to the previous question: Which idea of an artist do you prefer – the artist as the creator and author of his work, or the artist as a kind of channel, through which beauty and energy flow?

All living beings are channels through which energy flows, in my opinion the artist is one who cannot help but hold these energies, working with them through his personal feelings to sublimate them in something different such as music, poetry, paint, dance or theatre…and redefine reality sharing all this with the others. Rather than a creator is a bridgebetween the invisible and visible, between something very quiet and something screaming…is a re-creator

If you had to decide whether you exclusively use your voice or your guitar, which one would you choose? 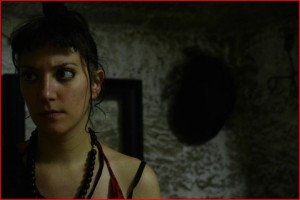 This question upsets me sincerely! Before “9″ I replied without delay that I could never do without my guitar, it has always been the instrument through which I expressed and it was crucial for my new album that as been a work emotionally very important and very intense for me. Now that “9” is out, I think I’m also ready for an instrument like voice. I recently discovered this universe and I’m madly in love with it! The voice is an instrument much more intimate and unpredictable, I believe it takes great courage to use it seriously, but of course, I plan to do it.

Have you used your voice always like that? Was there something that made you stop “conventional” singing or was it something gradual?

If for “conventional” singing you mean the use of words, I can tell you that I never felt the need to entrust my voice to the use of verbs at the moment.I prefer to trust instinct, belly, and let my voice free to express itself in all its possibilities, from screams to whispers, from the lyrical drama to the irony of certain falsetto just like children when they are caught by strong emotions… Certainly having listened some compositions of G. Ligeti like his “Aventures” and “Nouvelles Aventures” was very important and was a real enlightenment to me in this direction .

Maybe it’s already a music journalism cliché to talk about „voice used like an instrument“, but it’s obvious that you have a strong focus on the onomatopoetical use of language and on echolalia. Do you think that the most important and profound expressions are made by the sound/form of words rather than by semantics?

Oh! “Onomatopoetical” is a fantastic word!!!! More than a matter of importance is a matter of choice I think. For me music is a language closely related to emotion rather than semantic and of course, I like the sound of certain syllables, I like to use the roughness of some phonemes or the sensitivity of certain vowels. For me is not important if they have a semantic meaning, what interests me is the strength of their gestures.I think the sound of laughter has no need of the word “laughter” to be better understood… 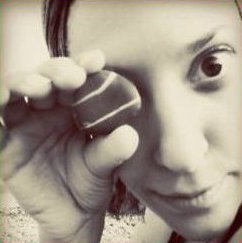 As I played your video of „Nature Boy“ to a friend who only knew the classical versions of the song, he first thought you intended to negotiate the original, but later revised his impression. What was the reason for interpreting this song and what is your opinion to the romantic philosophy that is carried in it?

Nature Boy is a song that always has a strong impact on me although I always listened the instrumental versions and I didn’t know the lyrics…What I like about this song is its evocative nature. I decided to use it also with its text as a perfect interlude between the two parts of my live that represent the invocation of emotion and technique, “Ipnotica” and “Imitatio”. Regarding the message of this song I absolutely agree that the only thing that really matters is “just to love and be loved in return”!

I experience your music as way powerful, but with a strong undertone of desperate rage, which makes it even more energetic. Do you believe in a cathartic function of music?

Of Course! Music has always been a powerful channel of catharsis, for me is the best way to express every personally feeling that I live, from happiness to despair.

“Polyphylla Fullo” seems to present a very painful experience (at least your singing seems to indicate that). Can you say a few words about that song?

“Polyphylla Fullo” is a song which I am very attached. Is part of my first CDr and is the song with which I like to introduce my live performancecomplete with explanatory panel. Is a songdedicated to one of my favourite insects. The Polyphylla Fullo is one of the few Coleoptera that live in trees instead of on earth and eating pine needles instead of dung.Is a kind of outsider who prefer a better life, probably more difficult to live. For what is pleasant to sit outside the group, this is always a rather painful…

One of the most energetic pieces is the „Nine Guitar Symphony“. It’s already from 2006, has it been on your debut CDr? Do you plan to re-release these works?

I am extremely pleased that you ask me about this track because this is the pieces from which all my solo project is started! Itis a superposition of nine classical guitars and was one of my first experiments with overlapping sound. I recorded it at home, using a multitrack tape, without making any use of loop or any post-production.When I felt the need to present my solo project also in live form, I bought a new electric guitar that I immediately called “9” that, thanks to this song, represented to me the symbol of multiplicity.I didn’t know that after two albums will born! I’d like to re-release it, also during a live performance, but I need of nine different guitarists! 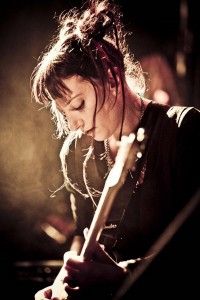 Why did you dedicate your album to the nine muses?

As I said before “9” is the name of my guitar and is mainly to it that my album is dedicated.Nevertheless the number “9” has a very wide symbology, including the number of the Muses. The first part of my album contains an “Invocation” and surely the first song, “INCIPIT- number 9”, want to make a propitiatory tribute to them.

The album contains nine songs, whose titles all consist of a word with the initial „I“, which is the ninth letter of the alphabet. Does this also refer to an interest in the sound of language?

Not exactly.This album is principally an initiatory journey through three stages. Each stage contains three other phases.The choice to coincide the number of tracks and the initial letters of its titles to the number “9” is totally aesthetic.

Numerology and the three parts „Invocazione“, „Iniziatione“ and „Incantesimo“ suggest also a occult interest. Is there any reference to this?

Of course. The symbolism and alchemy that revolve around number “9”are too strong to be not considered.But numerology is a discourse rather complex to be addressed in a few lines without being banal…. We could talk about that in the tarot the ninth major arcane is the Hermit,who has the awareness of light and shadow. It is the number associated with the months of human creation and in some literature is associated with the Devil according to the hypothesis that Jesus Christ has died after nine hours of agony…Mainly I focused my attention on the numerical symbolism related to initiation. This album is an autobiography and a personal reflection about emotional and contrapuntal possibilities of overlapping sound. The division into three parts consisting each of three pieces is more a metaphor about the route I have undertaken with my music until now

Your music sometimes shows traces of several Americana styles (also a title like “Desertsnake ballad” goes in that direction). Are there any influences from American artists? Do artists like Jarboe mean something to you?

I didn’t know Jarboe before your question! She reminded me a bit ‘Diamanda Galas that is an artist that I really adore! I listen to a lot of music and the list of American artists is as long as that for Europeans. Rock was born in America, who was not affected? In Europe was born what is called “classical music” and I really adore composers such as Gesualdo, Bach, Beethoven, Stravinsky… when I think of my main influences I can talk to you about the Third Movement of the Vivaldi’s Summer played by an heavy metal band with many deleay! 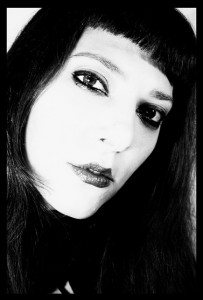 Your music was once described as “Espers jamming with a post-me(n)tal attitude, but with the Southern Lord blackened mood”. How comfortable do you feel with such a description?

Ahahahah!!!Often people who try to describe something not definable in a genre can create very funny chimeras! I like to use the term SHIPPINGHEAD to define my music, a border land where nightmares and sweet dreams are interwoven, switching between redundancy, minimalism, lyricism and of course, my background comes from metal and I don’t keep it hidden!