You’re active in some quite different fields of art, perhaps most prominently glass works, restoration and Icon painting. You’re also experienced in gardening, a fact which left numerous traces in your works. If you had to find a motto to describe what you do, what would it be?

I have a passion, not really a motto. I love to connect my eyes, brain, hands, and the beauty that surrounds me, together.

The flora is perhaps the most recurring subject of your imagery. As we talked recently, you said that plants are your religion. Can you tell us a bit about your idea of the spiritual qualities of plants?

When I look at plants I don’t expect them to help me right away. It’s like when people pray, they should not beg for miracles, they should behave properly and with principles, and then their prayers may be answered.

) It’s the same with plants: listen to them, look at them, smell them, and respect them, and then they will reveal their secrets. Observations are the key to success. Early spring snowdrops, late autumn roses, reds and yellows against a blue sky, scattered daisies in wild fields – there are so many precious jewels. I can not imagine my existence without them. And they all have stories that go so deep into our history — thousands of years — saving lives, feeding us, giving us shelter, clothing, and being so beautiful, patient and peaceful. It’s a magical reality. I live in it and I believe in it.

Do you have a favourite flower, herb etc., and if yes, what do you love about it? 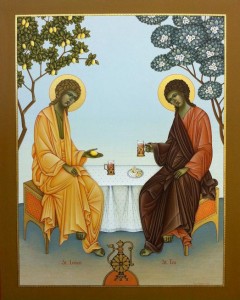 My favorites change from time to time

But I always love wild roses. The smell, the bright magenta against green textured leaves and orange fruits in autumn. I collected them with my grandmother, for winter teas, sometime ago, somewhere in the middle of Russia. I’m always happy to see wild roses.

You were part of the recent Berlin group show “My Icon“. Though your fifteen Icon paintings showed very unconventional motifs, my first impression was that of a real insider in the world of Icons. How early in your life did you discover your passion for this kind of art?

You are right about being an insider. I had my first degree in chemistry, but for survival painted matryoshkas. I got to art school when I was already 21, and only because that year a restoration program was launched — only 8 students. I was very nervous that I wouldn’t get into the program, so I applied to the Tver Icon school. I was accepted into both schools, and also worked in the local museum, restoring many old paintings and icons. I remember that my salary in the mid 90′s was about $50 per month. I painted during that time hundreds of 18th-century-style Icons for the Moscow Icon market, also for survival.

This was very tiring, so I was happy she I discovered the other world of art: sculpture, glass, design, etc. And then again, after years, I started to miss Icon Paintings so so much. Even though I painted occasional Icons for commission, my ideas and life experiences were not in the same direction with the normal content of an Icon. With all my respect for all religions, I don’t feel connected to any organized ones … But art and craftsmanship I love and admire. Not only Russian Icons, but Tibetan Thankas, Indian, Mexican and most indigenous arts, I find soulful, and incredibly deep and beautiful. Their language of painting tells stories of hunting, harvesting or angel adventures … and those attract me too. The way I paint right now – I combine a lot of different loves together.

Were you a religious/spiritual person back then or was your approach first and foremost of an artistic kind? 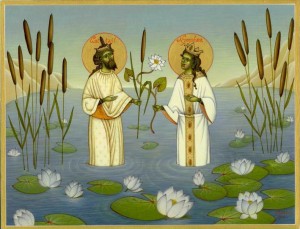 My Icon school was a small group of Russian Orthodox Iconostasis painters, woodcarvers, woodworkers and restorers. I was studying and working at the same time. I was the only one in the group who wasn’t religious. But nobody cared, I was fully accepted. In the beginning I was thinking about trying to be religious – but the more I tried, the more questions I had. Despite that, we had very good relations. They were very good painters, and very generous and kind people. And religion itself was such a new, mysterious thing, after we had built the Communist future. I love, but don’t believe in, fairy tales – plants are more real!

What role do Icons play in the society of the region you’re originally from?

Icons are images of Saints, or important Holidays. They connect praying souls to the spirit of the Saints. The more prayers that go through the Icon, the more valuable it is. All other values are just money. Tarkovsky’s movie Andrei Rublev speaks well to the role of icons in the traditional society of my region.

You studied Icon painting at an art school in Tver. What are the most important ideas and values you’ve taken along from there?

I learned the whole craft, not just the fine art. So, how to make: a wooden base, a special primer with honey and garlic, gilding, gold paint, egg tempera with minerals. And I learned the sequence of painting icon elements, gilding woodcarvings, restoring icons, etc. I traveled and installed iconostasis in Russian churches, staying in monasteries sometimes, exploring various fields of life. Churches were popping up like mushrooms in the 90′s: we couldn’t keep up with the demand for iconstasis installations.

What was the main impulse for you to combine these traditional subjects with new and unconventional elements?

The value of the natural world is something I truly believe in, and I wanted to express this in the most familiar way, using a medium I really understand. 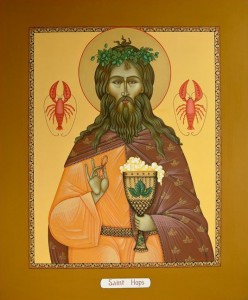 “Saint Hops“ was my favorite piece at the exhibition, perhaps some of the imagery reminded me of aspects of German culture. What can you tell us about this piece, and the narrative behind it?

If you look at hops plants, and you try to imagine how Saint Hops would look like, you’d notice that the plants have kind of fluffy seeds, and a bunch of them make beard-like shapes – brownish-green. In Russia we love boiled river crawfish with beer (images in the “Saint Hops” painting), but my new American life requires salted pretzels.

) It’s all about the pleasures of Hops. We give thanks to hops for good beer! At the moment in Eugene, Oregon, where I live, we like 20 local artisan breweries, and one has a special Autumn Pumpkin Chocolate Beer!

How long do you usually work on one piece, and what can you tell us about your techniques?

It depends what size a painting is. Five days to one month, so far. It would be cool to make a huge one, with a lot of characters, and spend 2-3 months … I use some traditional technique. I cook my own gesso with honey and garlic. I use reversible natural glue that adapts to humidity. I use gold leaf sometimes. I use acrylic instead of egg tempera. Also I scratch my drawing into gesso: this way, if in a few hundred years the paint disappears, the drawing will still be there, to help restorers.

You use a quite unorthodox, somehow “pagan“ imagery and present a number of invented Saints. Would you say that there is this aspect already under the surface of Christian mythology? How was the feedback for this in Russia?

All I know that all my Russian friends love my work: if some of them have questions, I answer. I never had any aggression, so far, towards my paintings. I wouldn’t call them “Pagan” or use any other big Words – it’s just a small tribute to different aspects of life.

There is a lighthearted, sometimes even funny element in these pieces, but to me this never appears like a sort of mockery. In my impression this has a more revitalizing than a destructive approach to tradition. Would you agree?

That is very nice of you! I hope it’s my personality. The small miracles that I see everyday, add fun elements to the stories. 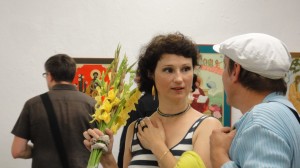 In western countries, the image of Russian Orthodox Christianity is quite twisted. There is – most of all since the Pussy Riot affair – this reputation as a wealthy and rather intolerant apparatus, but on the other hand, the “cultural“ side (the Icons, the liturgical music etc.) is highly appreciated. Hardly known are international groups like “Orthodox and Gay“. What would you say should Western European people keep in mind before developing an opinion about this complex topic?

In Russia right now it feels like the loudest slogan is “We are a Christian Country”. It’s very intolerant. Long-bearded men in strange outfits praying in an unknown old slavic language, defining the ‘morals’ of the country, by attacking women, gays, and anything they decide is ‘evil’. I don’t understand the difference between dancing in the church (“Pussy Riot”) or dancing in a park. Why one is legal and other a crime? The orthodox church is doing a very bad job of advancing with the times. They physically punish people they don’t like.

You’ve been living in the US for some years now. Do you think that the different cultural input had its share in your idea of challenging old artistic traditions?

It’s probably not just living in the US – it’s more like that I meet different people from all over the world. Some stay with me for years and some go. It’s always people. I love traveling too – I some very dear friends from my adventures.

There are some differences. Among the artists themselves, in Russia there are more people with skills, because there’s a very active academic system. In the U.S., there is less skill, but much more experimentation. In U.S. schools, ability is admired but skills are not really taught, and there’s a strange emphasis on the idea of an ‘art statement’. But there’s an important similarity: there’s not really any support for art or artists, either in fine or applied art, in either Russia or the U.S.

I really like the “American Twilight“ album by Crime and the City Solution, for which you stared as cover model. How did this collaboration happen?

I love that album too. I was surprised to be on the cover. I met Danielle De Picciotto and Alexander Hacke, and some other amazing people, during an adventure in Mexico, and that led to some interesting collaborations. Danielle asked me to model, and play for music videos and concert backgrounds for Crime & the City Solution, which she was filming, incorporating it with her artwork and stories. I love her videos and I’m very happy to be a part of her beautiful art! 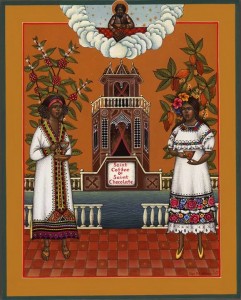 Which are the plans that you’ll concentrate on in the nearer future?

With a new icon, I just canonized St. Coffee and St. Chocolate. It’s possible that these two important plants were actually invented, by two individual women: one in Africa and one in Central America, through plant hybridization. I show these two possible geniuses meeting in a chocolate coffeehouse, in a timeless civilized scene, surrounded by gardens and canals. It’s so important that we expand our notion of the sacred. I’ll be proposing an exhibition, perhaps mixed with traditional icons, with the working title Saints without Borders. And of course I’ll spend time gardening.