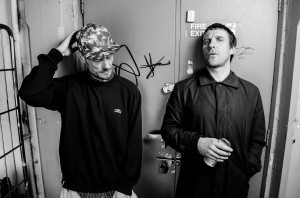 It may be a bit trite to begin like that, but there’s a lot of anger in what you do. Years ago I talked with a friend of mine and he said: “I don’t listen to aggressive music anymore. I’m 40 now. I’ve mellowed a bit “. But I think you can still feel a lot of anger.

Jason Williamson: No, it won’t go away.
Andrew Fearn: No offense to your friend but a friend of my cousin, he likes Talk Talk and Ambient stuff but when I met him at some family thing, he was all over it. He was all over Sleaford Mods. Because every bloke is pissed off. People just choose to forget.
J: But it’s your choice. A lot of people try not to think.

Would you then say that the current political climate in Britain has influenced the last record?

J: I’ve been doing this for seven years. It was always. You just had to feel the rock back then.
Andrew Fearn: It’s never gone away.
J: It’s never gone away for a long, long time in that country. It’s always been unjust. For the last thirty years it’s escalated rapidly.
A: [points at the table with fruit backstage] Lots of water, coke, bananas, fruit. You wouldn’t get that in the UK. You wouldn’t get fuck all. What you get is a locked door while you’re trying to get into the room. That’s all you get (laughs). 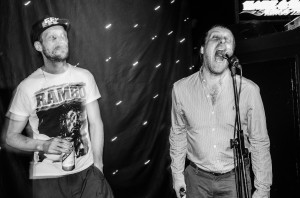 A: Not just German beer. Everything. Food, people, the culture. The infrastructure.

Ages ago I spent some time in Liverpool and I remember being stuck in the tunnel at Birkenhead quite often. After I had been to Birkenhead a couple of times I got an idea what the line “it took a tattoeoed boy from Birkenhead to really really open her eyes“ from the Smiths was about. How do you feel about Morrissey today?

A: I mean, he says funny things and he is a bit of a twat.
J: A fuckin’ moral ass all the time.
A: There’s something cool about him. He moved to America, to LA, and I think he wouldn’t give a fuck about all we think.

Maybe let’s turn to the way you compose your songs. Legend has it that it all started when somebody played a Black Metal-loop.

J: Yes, that’s true. I was experimenting with spoken word before that. I got back to the studio and try to work with it.
A: My part.
J.: Before (both laugh). So I started writing more in that vein. Using loops. That’s how it started.

Your last two albums have been released on Harbinger. How did that happen?

A: You know Harbinger?

Yes. I’m quite interested in postindustrial. So that was a name that rang a bell.

A: How did that feel for you then?

Well, at the beginning I was a bit surprised but after hearing you tonight it makes sense.

A: We sometimes get tagged with Pet Shop Boys. Because when I was a kid I was trapped in pop music. I didn’t know about a world outside of that. The Pet Shop Boys were quite important to me. But funny now, the Pet Shop Boys.
J: Sorry, what was the question again?

J: We used to play in a club called Ravel, the Ravel Club and that’s how we met Steve [Underwood].
A: The only good night in Nottz.
J: Steve came down. It was me solo. We didn’t do it together for about a year. We just used to record together.
A: I had done some music. It was quite embryonic. After a time we got to know each other more.. Then they had a festival at the club and he saw it. Then it all kicked up from there.

When I saw you live, I noticed that normally when you see people with a laptop, they are crouched behind it, pretending to a lot of stuff. With you it’s different. 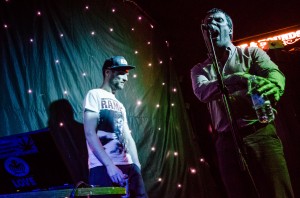 You obviously know all the lyrics.
(laugh)

J: The idea is to do it stripped down. We don’t use many instruments. He just presses play and that’s it. And then I’ll do the rest.

But there are a lot of things going on.

J: It create itself. You just surround yourself with whatever.
A: I think our electronic thing is very claustrophobic. It’s not a fake thing.

Would you say that the reactions are different in England than in Germany for example? Maybe that the audience focuses more on the lyrics?

J: In England now they are coming round to it.
A: They are, yeah. Before we came to Europe the British audiences were very cynical about it. They were hanging on to the old stuff. It’s working now.

Could you say a few words how the lyrics start? How do you get into the mood?

J: Sometimes it’s gibberish, sometimes it’s a real solid subject about something that pisses me off or somebody that’s pissed us off. Just a general subject that we talk about, It could start with a funny word, some of it could be made up, some of it is fantastical but there’s always an underlying account of day-to-day life.
A: Some of it that we think is very English but it’s probably something that everyone in the world knows. It’s s the thing that we do. That’s why we are not really having a problem being related to in Europe or anywhere else becuase we’re just talking people’s language. Being fancy about poetry or something. We’re not doing that.
J: There’s nothing going on.
A: There’s nothing going on. It’s a terrible time.
J: Music’s shit in England. Nobody’s doing anything. Everybody’s a careerist. If people get picked up and’ve got an ounce of talent it just gets absorbed into whatever record company signed them on and it just gets turned into a machine to make profit. So we’ve come up strictly by ourselves with Steve our manager and he’s taken us through his conncetions in Europe for gigs and through that we built an audience and got back to England with the press and everybody pickin’ up on it because we gigged over here, we’ve got a reputation. So Europe’s been good for us really.

I saw on your website that even the BBC interviewed you.

J: Yeah, BBC 6. But that’s in Nottingham. Mainstream media have picked us up quite a lot but it’s all through the gigging in Brussels, in Germany and then you go back and trying to play gigs in England. It just caught on for some reason. 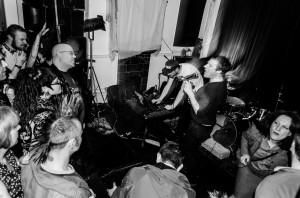 People have written about the swearing in the lyrics. Is it intentional or something that just happens?

J: It’s something that happens. It’s just the way I talk as well. I wanted to get across me as opposed to trying to do nice words and fuck all. It got to a point where I got so frustrated. So I just thought being me that’s been my greatest weapon. You should do music that suits you. Not try to be somebody else. That’s why so many people fall down. People may be good at writing songs but a melody will only carry so much. You could have your own personality in there as well.

Maybe just one last thing. I think I read on your bandcamp site that you played in a couple of band sbefore and you hated it.

J: Yeah. Because I hadn’t been myself. I hated it for the fact that it was just geared around trying to get a record deal. In a certain genre of music that everybody else had competely fucking done. Time and time again. Then after a while it got so monotonous and I got into spoken word a bit. So I could relate to that more because I could get more words out. That’s obviously when it happened that Saturday afternoon in the studio with the loop. Number one: That was interesting. It got my attention. Number two: I was my own boss. I didn’t have to compromise with anybody. I could just do my own thing. And I found that I was quite a good producer. I could get my ideas across really well. And it just escalated like that.